The Federal Government Declares War on the Nation

How strangely will the Tools of a Tyrant pervert the plain Meaning of Words!
–Samuel Adams 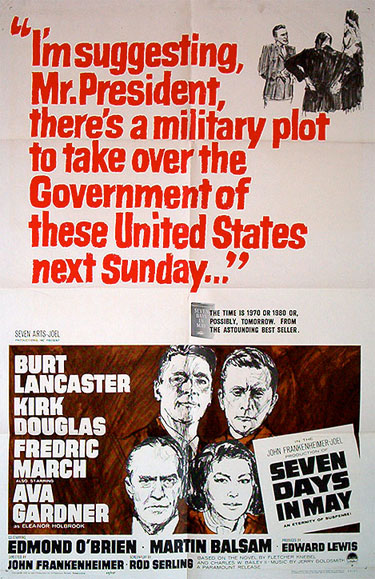 A twenty-first century rewrite of the Seven Days in May screenplay is certainly in order, this time with a different ending.

The recent debt limit congressional circus must be a new Twilight Zone episode written by a computerized program straight out of central casting. Rod Serling must be turning in his grave. A twenty-first century rewrite of his exceptional Seven Days in May screenplay is certainly in order, this time with a different ending. If there are any confused or co-opted worshipers of the federal government left, what more proof do you need that the bipartisan political criminal class is determined to destroy this nation? Not convinced that this assessment is correct; then you need remediable instruction in arithmetic. Increasing the spending with more borrowed money cannot reduce the debt.

The world financial markets are voting with their money, that the U.S of A. will no longer be the leader of free market enterprise. The flow of hot money into Treasury Bonds is tantamount to feeding the alligator with the hope that eating forged paper will forgo its appetite for flesh. This is the same strategy used to shackle market makers and docile societies into accepting, that the world financial system must be saved from their own greed and pillage, so that the dependent vassals can continue to pay their tribute.

The beltway bottom feeders know just how to scare their pudden-head constituents. With the complicity of the corporate controlled media, the task of getting away with murder has been elevated to a supreme political art form. ‘Pols’ can fool some of the public with all the false causes and bogus reasons for the dysfunctional federal government, but can they escape the distrust in their deal making skills, that never resolve any substantive issues? Even the current New York Times and CBS poll, cannot hide the disgust with an 82% disapproval sentiment.

This level of discontent is expected by anyone who understands the decade’s long destruction of the fundamental nature of the “federalism” form of the separation of powers principle. Many observers recognize the gross offense of adopting a gang of 12 approach for shepherding their flock in Congress to accept the dictums in the Amerika version of the Soviet Politburo.

Cited in The New American, the good Napolitano, Judge Andrew weights in correctly.

“Napolitano raised another — and unassailable — objection to the legislation. Napolitano noted: “This is this Congress binding itself and all future Congresses to a simple up-or-down vote.” In that sense, the new “Super Congress” joint committee is truly revolutionary, and unquestionably unconstitutional. Under the Constitution, no Congress can bind a subsequent Congress with rules of procedure, which is why one of the first acts of every new Congress after an election is for the House and Senate to separately approve new rules.”

Our friends over at Prison Planet quote the indomitable Larry Pratt.

“This is a game changer, they’ve decided that we don’t need the House of Representatives to originate revenue bills, we’ll just have the ‘super 12′ do that,” said Pratt, adding that Barack Obama would become the de facto deciding 13th member.

Legislation decided on by the Super Congress would be immune from amendment and lawmakers would only be able to register an up or down vote, eliminating the ability to filibuster.”

This attempt to relegate the House and Senate to water boy status is clear proof that the first causality of the federal dictatorship is to eat their own noncompliant elements in the legislature. When a NeoCon disinformation and newspeak publication like The Weekly Standard jumps on the bandwagon, you better grab your ankles. “Three Republican Senate sources tell TWS that senators who vote against the deal will be ineligible to serve on the so-called “supercommittee” for deficit reduction that the legislation creates.”

Purity of ideological devotion to the globalist integration of the former Republic is the true test of a collectivist commissar. Two world wars later and several police action conflicts removed, the extension of the garrison empire continues to expand. Name any definitive benefit that the populace gained from all the squander of treasure and the shedding of blood. All the time the bulwark of constitutional limited government is systematically dismantled.

The unfettered growth of government is the only reality that matters to the federal fascists. An economy that relies upon government spending for continuation is a zombie zone of the walking dead. The alternate media presents unending examples of this death march onto reservation of predatory prisons. An isolated cell awaits – with a number in place of your name. The silence of most occupants in the land of the timid breeds the sterile culture of fearful chickens. What more evidence does any citizen need that the federal government is organized and posed to repeat the same atrocities’ that totalitarian regimes committed in the last century?

What makes it much more acute is that a net of surveillance and a draconian database covers the entire globe. The satellite spy in the sky era extends to every aspect of communication, financial transactions and personal activity. The land of the free is now the camp of the interned.

How paradoxical, when you hear the regurgitation from progressive government lovers, that the federal and state agencies provide solutions, when the real irony is that these numb nuts are clueless what true populism represents, much less how to achieve a humane society.

Folks, the enemy have just declared itself as the Washington establishment and you are in the sniper sights of their full spectrum dominance scope. Research to your hearts content all the dire consequences of the despotic cabal that masquerades as your elected representatives. Notwithstanding, the pace of your own personal awakening; without direct and focused action, your fate is sealed.

An entire nation is not helpless resisting tyranny if citizens rebel. Only if you prefer denial to self-respect will the forces of treason prevail. Many Americans are not committed to liberty, and most fear personal responsibility of their own individual obligations. The hoi polloi never change history; they just accept the outcome. Isn’t this a prime reason why the Federal government continues to go on its merry way? The entire apparatus of the illegitimate bureaucracies steers the suppression of the will of the people.

The Obama nightmare is just one more leg in a complex plan to destroy the aims and purpose for fighting the American Revolution. The excessive conduct of federal loyalists loves their abuses of the public trust. When DC continually spends the people’s money and never has to pay back the unlimited loans, the lifestyle of the rich and famous, becomes part of government pensions and perks. There is no gambling risk or prospect of a loss as long as the taxpayer and future generations are providing the stakes.

There has never been a true civil war in this country. The War of Northern Aggression was waged precisely to prevent the Southern States from secession. The prospects of an enlightened and dedicated population taking up arms and defeating the military-industrial-security-complex require a miracle . . . turning water into wine. The creatures that dwell in this country are cloned cowards afraid of their own shadow. Forget about armed confrontation. Any attempt using violence plays into the hands of the Gestapo state.

However, developing a civilization of respectable civil disobedience is entirely in keeping with the best tradition of Western culture and Judeo-Christian teachings. Doubters can examine the recent book by Chuck and Timothy Baldwin, ROMANS 13: THE TRUE MEANING OF SUBMISSION for validation.

The federal government’s war against the Inherent Autonomy of the individual is the greatest danger to your own sustained existence and the survival of the nation. There is no way to reform a totally corrupt and crooked system of criminals. Families are being added to the extinct species list every day by a government that codifies same sex marriage and encourages abortions. Stating this factual axiom of civilized behavior is an unforgivable taboo to the Statists, who want the power over life and death and the eventual eradication of the family structure.

The core natural right and principle of individual self-defense is sacrosanct. Resistance to a despotic presidency and a crippled congress is a moral imperative. Defending, fighting and dying for the State, especially when that government is targeting you for annihilation, is absurd. The obvious elimination of witnesses to the diversion bin Laden raid illustrates just how ruthless the rogue government acts, even to their own special troops.

“A military helicopter was shot down in eastern Afghanistan, killing 31 U.S. special operation troops, most of them from the elite Navy SEALs unit that killed al-Qaida leader Osama bin Laden.”

The unceasing slurs against the Tea Party movement by a scared system through the misdirection media and their globalist masters is a sure sign that citizen participation in the political process is an act of resistance against the evil empire. The warfare state has mobilized against the American rebels. As the financial temple collapses and prices escalate, the pressure for “PC” compliance spreads like wildfire. Singling out selected dissenters for retribution requires the rest of the country joining in an uproar of protest.

Your life is at stake, ban together for dynamic resistance and confrontation. There is no other alternative. The Federal Government has started another undeclared war, but this time their homeland security proceeds to eradicate all real patriotic citizens and champions of liberty. This Twilight Zone episode needs a conclusion where the mythical Jordan Lyman ( no matter what name he uses ) is removed and all ensuing presidential treason is justly punished.