As part of its effort to encourage business owners to spy on their customers, the FBI has labeled the bulk purchase of food as a potential indication of terrorist activity, despite the fact that FEMA itself last year purchased $1 billion dollars worth of storable food. 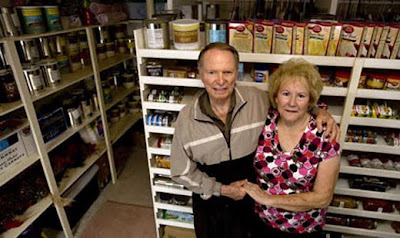 A flyer aimed at Military Surplus stores produced under the auspices of the FBI’s Communities Against Terrorism project, encourages owners to report people who “make bulk purchases of items to include….meals ready to eat”.

According to the flyer, the FBI advises store owners to demand ID’s from all new customers, as well as asking them questions about their purchase and being aware of “suspicious statements”.

The flyer also characterizes paying with cash or “demanding identity privacy” as an indication of terrorism.

The characterization by the feds of those who choose to protect themselves against rising food prices or a potential interruption in the food supply by purchasing storable food as potential terrorists is not only chilling – it is also completely hypocritical.

The Federal Emergency Management Agency (FEMA) itself ordered $1 billion dollars worth of dehydrated food in just one instance last year, purchasing a total of 420 million meals.

Are we to follow the FBI’s advice and treat this as a suspicious activity? Should FEMA be reported to other law enforcement agencies as a potential terrorist threat?

Indeed, the Department of Homeland Security is also busy stockpiling storable food and seed varieties in underground bunkers as part of preparations for domestic emergencies. Under its Resolve to be Ready program, the DHS even encouraged Americans to store food as part of a “basic emergency supply kit”.

Should we all be reporting Janet Napolitano to the See Something, Say Something hotline as a potential Al-Qaeda radical?

The federal government has gone completely overboard and is now educating the public to report fellow Americans for engaging in mundane behavior performed by millions of people routinely.

This flyer is just one of 25 being provided to businesses from across the spectrum, everything from Internet Cafes to tattoo parlors. Yesterday we highlighted how paying for a cup of coffee with cash is also a potential indicator of terrorist activity in the eyes of the FBI.

Even more chilling, the feds have also begun to characterize perfectly legitimate political and economic beliefs as those held by terrorists, effectively denouncing them as thought crimes.

As Reuters reported on Monday, authorities are now treating those who “believe the United States went bankrupt by going off the gold standard” as extremists who are a potential violent threat to law enforcement.

Paul Joseph Watson is the editor and writer for Prison Planet.com. He is the author of Order Out Of Chaos. Watson is also a regular fill-in host for The Alex Jones Show and Infowars Nightly News.

"Enlighten the people generally, and tyranny and oppressions of body and mind will vanish like spirits at the dawn of day."