Did you know that a storm 14 times larger than the Earth is happening on the sun right now? 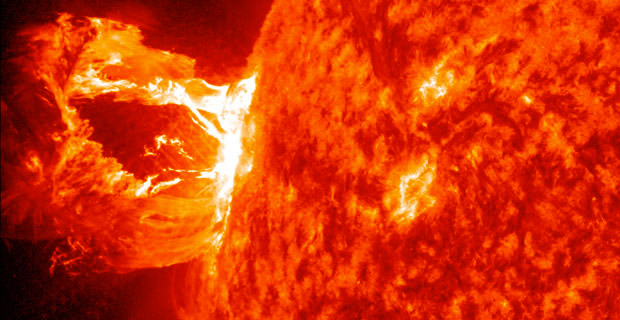 Did you know that a storm 14 times larger than the Earth is happening on the sun right now?  Earlier this week, it unleashed a flare which was a million times more powerful than all of the nuclear weapons in existence combined.  Fortunately, that flare was not directed at us.  But now the area of the sun where this solar storm is located is rotating toward Earth.  An eruption on the sun at just the right time and at just the right angle could result in a society-crippling electromagnetic pulse blasting this planet.  So if your computers, cell phones and electronic equipment get fried at some point over the next few weeks, you will know what is probably to blame.  Such an electromagnetic pulse has hit our planet before, and as you will read about below, some very prominent voices are warning that it will happen again.  It is just a matter of time.

Scientists tell us that the absolutely massive sunspot group that has recently formed on the sun is highly unusual.  NASA has described it as “crackling” with magnetic energy.  The mainstream media has not been paying too much attention to it, but this sunspot group is potentially extremely dangerous.

The following is an excerpt from an article on Discovery.com that gives some of the technical details about what has been going on…

The sunspot, a dark patch in the sun’s photosphere, represents intense solar magnetism bursting from the sun’s interior known as an active region. This particular active region, designated AR2192, has been rumbling with intense flare activity, recently exploding with 2 X-class flares, causing some short-lived high-frequency (HF) radio black outs around the globe.

Such blackouts are triggered by the intense extreme ultraviolet and X-ray radiation that solar flares can generate, causing ionization effects in the Earth’s upper atmosphere — a region known as the ionosphere. HF radio can be strongly hindered by this activity, triggering blackouts that can effect air traffic and amateur radio operators.

The other day a flare erupted which did cause radio blackouts all over the world for a time.  But we were fortunate that the flare was not directed at us.  If it had been, the results could have potentially been catastrophic.

We have not seen anything like this sunspot group for a very long time, and according to a report posted by the Daily Mail, experts are saying that we might not see another one like this for 25 years…

Space Weather Prediction Center forecaster Christopher Balch, meanwhile, said the flare affected radio that uses part of the upper atmosphere. That includes some but not all radar and plane systems as well as amateur radio.

Mr Balch said the storm briefly was rated as strong for affecting Earth radio systems but then dropped to minor levels.

The event followed months of near-silent activity on the sun before the huge flare erupted from a sunspot 14 times bigger than Earth.

A spokesperson for the Met Office Space Weather Operations Centre told MailOnline it may be the biggest sunspot for 25 years.

Unfortunately, there are no signs that this sunspot group is fading.

In fact, an official at NASA’s Goddard Space Flight Center said that “it continues to grow in size and complexity“.

Below, I have posted a video which shows some of the recent activity on the sun.  As you can see, these explosions can be quite violent…

As advanced as we like to think that we are, the truth is that we are still very much at the mercy of this giant ball of fire that our planet revolves around.

And even with everything else that is going on in the world today, a massive electromagnetic burst from the sun remains one of the greatest potential dangers to our way of life.

Just check out what billionaire Paul Singer recently had to say about the matter.  He believes that an EMP event is “the most significant danger” the world is facing right now…

“While these pages are typically chock full of scary or depressing scenarios, there is one risk that is head-and-shoulders above all the rest in terms of the scope of potential damage adjusted for the likelihood of occurrence,” Singer wrote to clients of his $24.8 billion Elliott Management on Monday in a standard investment update letter. “Even horrendous nuclear war, except in its most extreme form, can [be] a relatively localized issue, and the threat from asteroids can (possibly) be mitigated.”

“(A natural EMP event) today would cause a massive disruption to the electric grid, possibly shutting it down entirely for months or longer, with unimaginable consequences,” Singer wrote. “Only two years ago, the sun let loose with a Carrington-magnitude burst, but the position of the earth at the time prevented the burst from hitting it.The chances of additional events of such magnitude may be far greater than most people think.“

For those not familiar with “the Carrington Event”, it was a massive solar storm in 1859 that fried telegraph machines all over Europe and North America.  You can read about it on Wikipedia right here.

For example, check out what U.S. Representative Scott Perry said earlier this year…

“The consequences of such an attack could be catastrophic; all electronics, power systems, and information systems could be shut down,” Rep. Scott Perry said in prepared remarks during an EMP hearing inMay held by the U.S. House Committee on Homeland Security. “This could then cascade into interdependent infrastructures such as water, gas, and telecommunications. While we understand this is an extreme case, we must always be prepared in case a rogue state decides to utilize this technology.”

What we are talking about is a potentially society-crippling event.

For much more on this, I encourage you to check out my previous article entitled “What Are You Going To Do When A Massive EMP Blast Fries The U.S. Electrical Grid?”

In a worst case scenario, we could be facing a situation where the power grid is down for months or even years.

How would you and your family survive during such a crisis?

Even though this has never happened in modern times, it is a very real possibility.  In fact, just a couple of years ago the Earth experienced a very near miss.

As the Inquisitr detailed last month, such an event could throw us back into the pre-industrial age in a single instant…

According to Peter Vincent Pry, who advises Congress on homeland security issues, a large enough geomagnetic solar storm could produce effects similar to an electromagnetic pulse (EMP) generated by a nuclear weapon that “could collapse power grids everywhere on the planet and destroy EHV (extra high voltage) transformers and other electronic systems that would require years to repair or replace.” While the danger posed by a G5 solar storm gets mentioned occasionally at Congressional hearings, there really hasn’t been any major action.

Earlier this year, a Homeland Security adviser said America is not ready for an EMP attack, never mind a G5 solar storm, and it’s claimed that the U.S. power grid fails more often than any other in the world. If a large enough solar storm does impact the United States, the damaged electronic systems can cause a cascade of failures throughout the broader infrastructure, including banking systems, energy systems, transportation systems, food production and delivery systems, water systems, emergency services, and even the internet, so people may not even realize at first what has happened. Effectively, the U.S. would be thrown back to the pre-industrial age following a solar superstorm, and yet we are not prepared for the worst.

Usually people talk about how this could potentially happen “someday” in the future.

But with an extremely large solar storm currently rotating toward Earth, there is a very real possibility that an absolutely massive electromagnetic pulse could be headed our way at any time.

However, whether it happens next week, next month or next year, scientists assure us that it is inevitable that another Carrington Event will happen one day.

And when it finally happens and all the lights suddenly go out, what will our society look like afterwards?