Did you know there's an "invisible" drug that a majority of Americans consume on a daily basis—a drug so harmful it's been proven to cause serious health issues, including damage to your bones and teeth, as well as your kidneys, thyroid, pineal gland, and even your brain. This drug is so pervasive that over 40 percent of all American teens between the ages of 12 and 15 show visible signs of having been overexposed to it, and, shockingly, recent international studies indicate that even small doses of this drug can lower the IQ in children.

What is this drug?

You are Being Drugged Without Your Consent…

Many do not realize that fluoride is indeed a drug. In fact, if you decided you wanted to take it, you'd have to get a prescription for it. Yet it's added to municipal water supplies reaching more than 180 million Americans, including infants and the elderly. This is a significant problem, because once you add it to the water supply, you have no way of gauging how much of the drug any particular person will consume on any given day.

Consider this: It is illegal and unethical for a medical doctor to give you a drug without specifying dosage, and to fail to monitor your health for side effects from the drug. Yet, your water authority is not only allowed, but encouraged to add a toxic drug—fluoride—to your drinking water without your consent and without any way of knowing who in your household is drinking it, how much, and the effect it is having.

Water fluoridation began in the mid 1940's as a solution to fluoride pollution generated by the Atomic Bomb Program and the aluminum industry, but it was cleverly "sold" to dentists and the general masses as a preventive strategy for reducing tooth decay... It has been heralded as one of the top 10 greatest public health achievements of the 20th century.

Alas, it may actually be more accurate to describe it as one of the greatest mass poisonings in our history. Sodium fluoride, which is a far simpler toxin than the fluoride compounds used for most water fluoridation, has been used for rat and cockroach poisons, so there is no question that fluoride is highly toxic.

In a sane world, public health policy would be based on sound and conclusive science. Unfortunately, that is not the case when it comes to water fluoridation. In fact, despite overwhelming evidence demonstrating that fluoride is not an effective preventive strategy against tooth decay and may be causing significant health problems in many individuals, the practice of adding fluoride to municipal water supplies continues unabated. A majority, 64 percent, of all drinking water in the United States still receives this ill-advised treatment.

Why does this practice continue when it flies in the face of all the current research?

The answer to this question is just one of the countless shocking revelations featured in Professional Perspectives on Water Fluoridation. The film, which features a Nobel Laureate in Medicine, scientists, dentists, medical doctors, and leading researchers in the field, reveals the science behind fluoridation, the effects it has on your health, and why there is no logical or rational reason to continue fluoridating ANY water supply.

Would You Drink Shampoo to Clean Your Hair?

The only science that mildly supports the use of pharmaceutical-grade fluoride as a preventive against dental caries is topical use of fluoride (although even that is debatable, based on more recent findings). There is really no scientific basis at all for ingesting fluoride to protect your teeth! In fact, when fluoride is taken internally, it actually damages your teeth, causing a condition known as dental fluorosis; the pitting and discoloration of teeth. Today, 41 percent of American children between the ages of 12 and 14 have dental fluorosis.  But that's not all. When you swallow, fluoride it can also cause:

This is what the science is telling us about the ramifications of fluoride ingestion. And, yet, rather than taking the precautionary approach and stopping fluoridation until we know more, our policymakers continue to blindly forge ahead; refusing to give the scientific evidence the attention it deserves.

The CDC and ADA Advise Against Fluoridated Water for Infants

In November of 2006, the American Dental Association (ADA) sent out an email to alert its members of their recommendation to parents to not use fluoridated tap water to make infant formula.

Because an average glass of treated water contains 250 times more fluoride than breast milk. A few days later, the CDC followed suit. But neither of them openly informed the public!

As a result, millions of parents are still using tap water to make up formula, completely oblivious of the fact that the agencies that promote fluoridation in this country have also issued a specific warning against using fluoridated water for this purpose. Not only that, but by fluoridating the municipal water supply, you doom many low income families to fail to protect their young children from this dangerous drug, even if they have this information.

African American children have been found to consume significantly more total fluids and plain water, and thus receive more fluoride than white children. African American mothers are also less likely to breastfeed than most other racial groups, and since breast milk contains very low levels of fluoride, babies fed formula made with fluoridated water could receive up to 200 times more fluoride than a breast-fed baby. Thus African American children have a higher risk of being overexposed to fluoride from infancy on.

Get Informed; Get the Facts…

Knowledge is power, and you have the power to not only protect yourself, but also to help protect others once you know the truth. The United States is one of the few remaining developed countries in the world that still fluoridates a majority of its water supply.

Don't you agree that it's time for our policymakers to stop putting your and your family's health at risk? I strongly recommend viewing Professional Perspectives on Water Fluoridation. We can eliminate this harmful practice, but it's going to take people like you to make it happen—so please watch the film to get the cold hard facts, and share it with everyone you know.

How You Can Help END Water Fluoridation 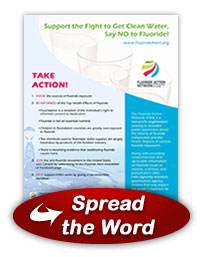 The Fluoride Action Network has a game plan to end water fluoridation in both Canada and the United States, and this Fluoride Awareness Week will hopefully bring us a lot closer to that goal by spreading mass awareness. Our fluoride initiative will primarily focus on Canada since 60 percent of Canada is already non-fluoridated.  A few weeks ago the city of Calgary stopped fluoridating over a million people and last October the citizens of Waterloo, Ontario voted it out in a referendum.   If we can get the rest of Canada to stop fluoridating their water, we believe the U.S. will be forced to follow. Please, join the anti-fluoride movement in Canada and United States by contacting the representative for your area below.

In addition, you can: