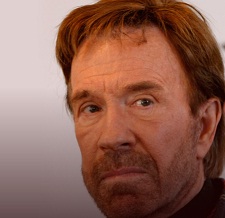 Actor and activist Chuck Norris may be considered one of the most popular action stars of his time, but people are once again talking about him for his new advocacy.

Norris, 76, recently wrote an article at World Net Daily to talk about conspiracies surrounding chemtrails and the U.S. government. He argued that people are not taking the issue seriously when there is evidence pointing to the government as having already used chemtrails.

The chemtrails conspiracy theory claims that the U.S. government or other powerful people are using airplanes, helicopters, and other types of aircraft to control weather and people.

In his article entitled Sky Criminals, Norris urged his readers to join him in asking more questions about “covert chemtrailing” – which means that not only is the government practicing it, but also does it in secret.

The actor wrote that the government is performing geoengineering through various means, mainly through Solar Radiation Management, or SRM, and Carbon Dioxide Removal, or CDR. These methods aim to artificially alter the Earth’s climate systems as results of global warming.

Norris explained SRM in greater detail, writing that it aims to “reflect sunlight” and reduce global warming. A few popular examples are stratospheric sulfate aerosols that serve as “dimming agents” in the sky. Once these chemicals are released into the air, they form “artificial clouds” to help reduce warming.

The actor-activist then moves on to expound on chemtrailing, which is the “public’s term for the classified [covert] and ongoing artificial modification of Earth’s climate systems using reflective nano-materials (aerosols) to reflect sunlight. The aerosols are dispersed via jet aircraft trails that expand into reflective artificial clouds.”

He tries to validate his claim by pointing out that Sarah Zielinski, who is an award-winning science writer, wrote for Smithsonian in December about “accidental geoengineering.”

In the article, Zielinski cited a report from Charles Long who works for the NOAA’s Earth System Research Laboratory in Boulder, Colorado, where he described the blue sky turning white because of airplanes passing by.

Zielinski pointed out that the phenomenon may be accidental geoengineering.

While Long and some scientists believe that this whitening of the air is caused by chemicals in the air reacting to the byproduct of plane engines, Chuck Norris raises the question of whether there are actually “sky criminals” who are deliberately releasing the chemicals into the air without the people’s knowledge.

Norris then presented details that could shed light on the possibility of the government using airplanes to mass-vaccinate the public.

In 2003, research data was released regarding the possibility of mass and rapid immunization of people through aerosol vaccines that can be released in the air. He then highlighted what the researchers concluded: that “aerosol immunization seems a promising method of vaccination.”

Chuck Norris believes that, 13 years after that research, the government may have already used the new immunization method in test areas and other places.

“Whatever the intent or justification, and whether or not the purpose is for mass vaccinations or some other devious plot,” Norris wrote in his article.

He even told readers that if they do not believe that there is smoke-screening in the sky trails left behind by planes, he has a “London Bridge to sell” in Arizona.

The actor also wrote about the possibility of a cover-up by the government. He referenced the what happened to a 2015 science research article by Dr. J. Marvin Herndon about the consequences of chemical geoengineering on public health.

Just two weeks after the article by Herndon was published, it was retracted from the journal because of one minor issue: “The language used in the paper is often not sufficiently scientifically objective for a research article.”

Chuck Norris called for his readers to wake up, and recited a few lines from the late singer Prince’s song, “Dreamer.”