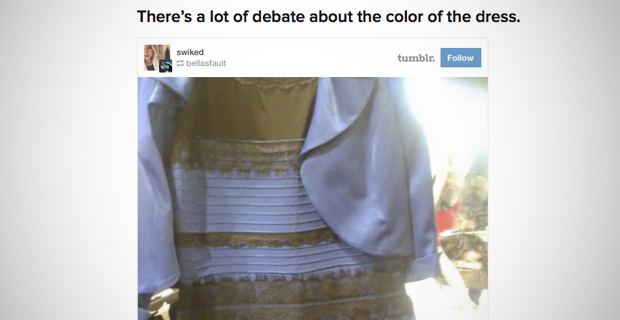 While the Obama administration celebrates its latest power grab, the federal takeover of the Internet and the ATF’s unlawful ammo ban, Americans are debating the color of a woman’s dress which went viral over social media.

On Thursday, the Federal Communications Commission voted to declare the Internet a “public utility,” opening the door for feds to regulate on-line speech, and the Bureau of Alcohol, Tobacco and Firearms announced its plan to illegally ban M855 AR-15 ammunition, and Americans are outraged – because they couldn’t decide if a dress posted on Tumblr was black and blue or white and gold.

“This is very important guys,” Alison Lynch for Metro wrote. “Are you Team Blue and Black or Team White and Gold? You need to pick a side.”

The news tracking web site Viral News Chart revealed that at the time of this writing, the top two “political” news articles in the past 12 hours were both about the dress, with the ammo ban coming in third.

“This dress color war is the perfect way to end a wonderful day on the Internet,” The Verge reported Thursday, the day Obamanet was born.

The Obama administration’s takeover of the Internet is particularly concerning because the FCC consulted with self-described socialist activists to develop its “Net Neutrality” program, which was largely funded by billionaire George Soros, a Nazi collaborator who is also responsible for the current war in Ukraine.

“We need to do whatever we can to limit capitalist propaganda, regulate it, minimize it, and perhaps even eliminate it,” wrote Dr. Robert McChesney of the University of Illinois, whose work influenced the FCC. “The fight against hyper-commercialism becomes especially pronounced in the era of digital communications.”

Equally concerning is the ATF’s attempt to ban M855 AR-15 ammunition by declaring it “armor piercing” because according to federal law, 18 U.S.C. 921 (a)(17)(B), a bullet classified as “armor piercing” must have an entirely metal core or have a jacket weighing more than 25% of its weight, which wouldn’t include M855 rounds because their bullets are partly lead.

“While M855 has carried the exemption from a 1986 prohibition on manufacture, importation and sale, (but not possession) of ‘armor piercing’ rounds, it’s clear from the definition that it should have never needed to be ‘exempted,’” Bryan Black of Itstactical.com revealed.

But while federal agencies publicly disregard the law, Americans are only concerned with trivial things which have no lasting effects on their lives.

"When you judge another, you do not define them, you define yourself."