Charles Manson, the man who masterminded the brutal murders of nine people in the summer of 1969 in an effort to spark a race war in America, has adopted a new cause from his prison cell in California – he is a prophet for the global warming movement – sharing common ground with top academics, environmentalists and even the White House science czar in calling for large numbers of human beings to be exterminated in the name of saving the Earth.

A study of Manson’s belief system is an alarming exercise in understanding the roots of the modern day eugenicist movement, which is propagated via the notion that overpopulation is killing the planet and causing global warming.

The infamous “Manson family” were responsible for the barbaric slayings of actress Sharon Tate and her unborn baby, as well as Rosemary LaBianca and her husband Leno, murders that sent shock waves through America and marked a sudden and crashing halt to the “free love” hippy movement of the 60’s. Manson himself shot and wounded one man, Bernard Crowe, and directed his cult-like followers in the murders of nine other victims.

Manson masterminded the murders in a bid to precipitate a race war between whites and blacks which he dubbed “Helter Skelter,” a term he took from the Beatles song of the same name. Manson and his followers were arrested for the murders in October, November and December of 1969 and all received life sentences.

Preaching the same cause as James Jay Lee, the crazed eco-warrior who stormed a Discovery Channel building last week armed with guns and explosives, Manson continues to attract a loyal following from new members of his “family” who share the notorious killer’s obsession with the need to exterminate humans in order to save the Earth from global warming.

Manson, who still adorns a Nazi swastika tattoo on his forehead, did not glom on to the global warming bandwagon after seeing Al Gore’s Inconvenient Truth, the movie that gunman Lee cited as his inspiration, he was preaching about the need to kill people in order to save the polar ice caps from melting as far back as the mid-80’s.

Watch the following clip, filmed in 1987 by the Today Show, in which Manson attempts to absolve his role in the brutal murders of Sharon Tate, Rosemary LaBianca and seven others, by saying the slayings were justified in the name of the environment and expressing regret that he could not have killed more people.

Responding to a question about why he directed the killings, Manson responded, “I am working to save my air, my water, my trees and my wildlife, and I’m trying to do away with society.”

“Why don’t you tell them that the polar caps are melting because you’re creating so much heat with this machine,” continues Manson….”Maybe I should have killed four or five hundred people then I would have felt better, I would have felt like I’d really offered society something…..the truth is the planet Earth is dying.”

In a separate clip from the same interview, Manson chillingly states, “If I started murdering people, there’d be none of you left.”

The You Tube clips of Manson’s prison interviews are accompanied by hundreds of comments from people who agree with his barbarous views on the need to kill humans in order to save the Earth.

Manson also talks about the need to set up “suicide parlors” so that people can kill themselves in an orderly fashion so that the world can be cleansed of humans.

In another interview with Geraldo Rivera, Manson goes further, saying that 50 million dead will be required to please mother Earth.

“I’m gonna kill you, as many as I can. I’m gonna pile you up to the sky, I figure about 50 million,” said Manson, “I figure if I can get about 50 million of you I might be able to save my trees and my air and my water and my wildlife.”

Mason characterized the slaughter of 50 million people in the name of saving the planet as “just a drop in the bucket of what’s really coming.”

The fact that Manson, considered by many to be evil incarnate and the leader of one of the most creepy and bloodthirsty cults ever recorded, is now a prophet for the religion of global warming and climate change, proves that the real agenda behind global warming, neo-eugenics, has its roots in the darkest and most abhorrent recesses of the human mind.

Manson’s eugenicist doctrine didn’t end when television stations were banned from interviewing him in the late 80’s, the dark mystique surrounding the former cult leader continues to this day, with followers still attempting to communicate and meet with the now 75-year-old inmate of Corcoran State Prison, eager and receptive to his environmental message.

One such individual is a man Manson himself dubbed “Gray Wolf,” who moved close to the prison for the express purpose of hearing Manson’s insights on climate change and the environment. “Manson thinks the destruction of the environment is much more serious than we are being made out to believe,” Wolf told CNN. “Our government keeps covering up problems with pollution, with coal, with automobiles. Charlie says we need to get back to the horse.”

In calling for a return to the agrarian age, which ended in around 1700 as the industrial age began, Manson is echoing the propaganda of people like author and environmentalist Keith Farnish, who in a recent book called for acts of sabotage and environmental terrorism in blowing up dams and demolishing cities in order to return the planet to pre-industrial society. Prominent NASA global warming alarmist and Al Gore ally Dr. James Hansen endorsed Farnish’s book.

James Jay Lee also parroted this anti-industrialist creed, calling for the need to “disassemble civilization” in his online rant.

In a phone conversation, Manson characterized the emission of carbon dioxide as a sin punishable by criminal charges, in rhetoric chillingly similar to that espoused by global warming alarmist like Al Gore who have advocated carbon offsets and CO2 taxes as indulgences to pay for such activity.

Another of Manson’s “followers,” a 24 year-old woman Manson named “Star,” invoked the Club of Rome’s infamous 1990 publication entitled The First Global Revolution, in which the organization outlined how they would manufacture ecological scares in order to manipulate the public into accepting the imposition of a dictatorial world government run by them, when she talked about Manson’s belief that humans were the enemy of the Earth.

“The goal, really, the main goal is to basically save life on the planet Earth from the humans,” she said. “We have a key to make this goal accomplished, and that key is Charlie Manson,” she said.

But who should lead this crusade to rid the planet of evil humans, or “parasitic human infants” as James Jay Lee called them? Manson makes it clear who should be empowered to carry out the eugenics program in a 1987 interview with the BBC’s Bill Murphy, and it’s the same “planetary regime” that White House science czar John Holdren advocates to carry out forced abortions and mandatory sterilization procedures in his 1977 book Ecoscience.

Indeed, what could be termed Manson’s “official website,” which is named after the philosophy he coined, Air, Trees, Water, Animals (ATWA), features on its front page a globe with the words “One World Order” written underneath. A special page is dedicated to this promotion of a “one world order,” which includes a poem written by Manson about how the foundation of a one world order is closely related to a “green” lifestyle. 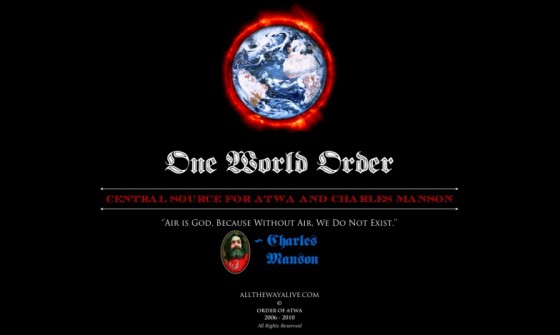 Manson’s call for a one world order to manage the planet on an environmentally sound basis mirrors the thoughts of James Lovelock, top environmentalist and creator of the Gaia hypothesis, who told the Guardian earlier this year that “democracy must be put on hold” to combat global warming and that “a few people with authority” should be allowed to run the planet.

Another Manson fan website, again named after the Air, Trees, Water and Animals acronym, proudly displays the mutilated corpse of pregnant victim Sharon Tate on its front page, declaring that Manson is both the God and the devil.

In 1975, one of Manson’s “family,” known as “Squeaky” Fromme, attempted to murder President Gerald Ford in the name of saving California’s redwood trees. In resorting to violence for the sake of environmentalism, Fromme shared the same motivations invoked by James Jay Lee some 35 years later.

Manson’s belief that humans need to be killed in large numbers in order to preserve the environment is one shared and promoted by many prominent academics and scientists, people like Dr. Eric R. Pianka, an American biologist based at the University of Texas in Austin. During a speech to the Texas Academy of Science in March 2006, Pianka advocated the need to exterminate 90% of the world’s population through the airborne ebola virus. The reaction from scores of top scientists and professors in attendance was not one of shock or revulsion – they stood and applauded Pianka’s call for mass genocide.

Saying the public was not ready to hear the information presented, Pianka began by exclaiming, “We’re no better than bacteria!”, as he jumped into a doomsday malthusian rant about overpopulation destroying the earth.

People like James Jay Lee are now turning such rhetoric into violent action, following in the footsteps of others like Francisco Lotero and 23-year-old Miriam Coletti, who killed themselves, their son, and attempted to kill their own baby as part of a suicide pact to bring attention to global warming.

Charlie Manson – the mastermind of some of the most gruesome and horrific murders America has ever seen – and a man who expressed regret during interviews that he didn’t get the chance to kill 50 million humans – believes vehemently in the same doctrine pushed by top environmentalists and academics, and he has a willing band of creepy “followers” on the outside whose mindset differs little from members of “the family” who followed Manson’s orders in butchering eight people, a new cadre of followers more than eager to further this religion of death.

Manson’s advocacy for the religion of death, and his call for violence in the name of global warming and overpopulation, would be dismissed as the inane rantings of an evil psychopath if it were not shared by people holding significant positions of power in government, academia and science today.

If this doctrine of neo-eugenics, also shared by crazed gunman James Jay Lee, the extended Manson “Family,” the parents in Argentina who killed their kids for climate change, and some of the top environmental scientists and academics in the world, is allowed to take hold, we can expect to see many more bizarre and tragic incidents like that witnessed last week in Silver Spring, Maryland.