The process of transformation, even if it brings revolutionary change, is likely to be a long one, absent some catastrophic and catalyzing event – like a new Pearl Harbor.

Over a decade after the largest domestic attack in U.S. history, there are still many unanswered questions about what happened on September 11, 2001 and why. 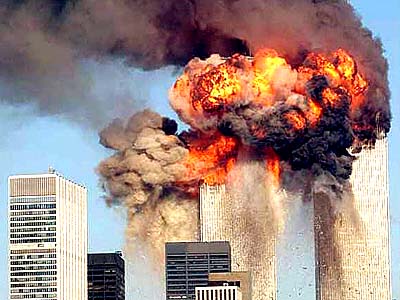 While the Bush administration denied that they could have possibly seen such an event coming, a disclosure of CIA documents reveals that they did, in fact, have foreknowledge that a major attack was in its final planning stages, and that it would be coordinated and large-scale attack with major casualties.

Was the Bush Administration incompetent in its handling of intelligence that was warning of an imminent attack, or were there bigger forces at play?

The direct warnings to Mr. Bush about the possibility of a Qaeda attack began in the spring of 2001. By May 1, the Central Intelligence Agency told the White House of a report that “a group presently in the United States” was planning a terrorist operation. Weeks later, on June 22, the daily brief reported that Qaeda strikes could be “imminent,” although intelligence suggested the time frame was flexible.

And the C.I.A. repeated the warnings in the briefs that followed. Operatives connected to Bin Laden, one reported on June 29, expected the planned near-term attacks to have “dramatic consequences,” including major casualties. On July 1, the brief stated that the operation had been delayed, but “will occur soon.” Some of the briefs again reminded Mr. Bush that the attack timing was flexible, and that, despite any perceived delay, the planned assault was on track.

Yet, the White House failed to take significant action. Officials at the Counterterrorism Center of the C.I.A. grew apoplectic. On July 9, at a meeting of the counterterrorism group, one official suggested that the staff put in for a transfer so that somebody else would be responsible when the attack took place, two people who were there told me in interviews. The suggestion was batted down, they said, because there would be no time to train anyone else.

In the aftermath of 9/11, Bush officials attempted to deflect criticism that they had ignored C.I.A. warnings by saying they had not been told when and where the attack would occur. That is true, as far as it goes, but it misses the point. Throughout that summer, there were events that might have exposed the plans, had the government been on high alert. Indeed, even as the Aug. 6 brief was being prepared, Mohamed al-Kahtani, a Saudi believed to have been assigned a role in the 9/11 attacks, was stopped at an airport in Orlando, Fla., by a suspicious customs agent and sent back overseas on Aug. 4. Two weeks later, another co-conspirator, Zacarias Moussaoui, was arrested on immigration charges in Minnesota after arousing suspicions at a flight school. But the dots were not connected, and Washington did not react.

Could the 9/11 attack have been stopped, had the Bush team reacted with urgency to the warnings contained in all of those daily briefs? We can’t ever know. And that may be the most agonizing reality of all.

The September 11th attacks directly led to the tragic deaths of over 3,500 Americans. At the time it would have been impossible for most people to fathom the implications it would have on everyday life in America – and the world.

Over a decade on, when looking in hindsight, a much sharper picture emerges.

Though conspiratorial in nature, one can’t ignore the fact that key players in the Bush Administration had, just a year before, developed a document [pdf] that discussed the centralization of government power, expansion of military influence (domestically and abroad), management of the internet and cyberspace, and the expansion of American hegemony to all resource-rich corners of the Earth.

While the plan was always to “rebuild America,” without a catalyzing event as a pretext the transofrmation of could have taken many decades.

September 11th fast-tracked that fundamental transformation and allowed President Bush, and then his successor President Obama, to initiate a blanket of security directives, military action and domestic legislation that would have been unheard of previously.

In addition to being used as a pre-text to deploy the United States military in force across nearly the whole of the middle east, the blowback has enveloped every aspect of American life from the way we travel and communicate, to how we engage in commerce and behave in society.

By all accounts, we are less free today than we were before September of 2011, and one can’t ignore that it was this single event that triggered the many geo-political and social machinations of the last ten years.

Stopping short of suggesting that President Bush, the US military, and national intelligence agencies were all “in on it,” is it out of the question to suggest that someone, somewhere – perhaps a conglomeration of elite global political and business interests – may have taken steps to let these events play out in the hopes that it would allow for a more rapid expansion and coming to fruition of ideas and ideals that were outlined in the Project for a New American Century and other initiatives?

While unimaginable for the majority of the people of this planet, some of those in the upper echelons of the global power structure live by a different set of rules and have goals that we may never be fully privvy to.

It’s happened throughout history, why should we believe without question that it can’t – or hasn’t – happened to us?

"You can fool some of the people all of the time, and those are the ones you have to concentrate on."