NYT reports in 2012 FBI’s habit of fabricating terror attacks to make high-profile arrests – now Boston suspects’ family claims sons were led every step of the way by the FBI. 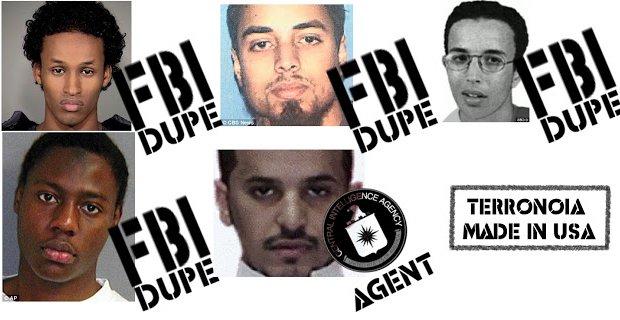 In an April 2012 New York Times article titled, “Terrorist Plots, Hatched by the F.B.I.,” it is revealed that many of the high-profile terror attacks foiled by the FBI, were in fact fabricated from start to finish by the FBI itself. The article states:

The United States has been narrowly saved from lethal terrorist plots in recent years — or so it has seemed. A would-be suicide bomber was intercepted on his way to the Capitol; a scheme to bomb synagogues and shoot Stinger missiles at military aircraft was developed by men in Newburgh, N.Y.; and a fanciful idea to fly explosive-laden model planes into the Pentagon and the Capitol was hatched in Massachusetts.

But all these dramas were facilitated by the F.B.I., whose undercover agents and informers posed as terrorists offering a dummy missile, fake C-4 explosives, a disarmed suicide vest and rudimentary training. Suspects naïvely played their parts until they were arrested.

The report would also reveal that a fabricated, then foiled attack in Portland in 2010, even included a van and an inert bomb parked next to a real crowd of thousands during the city’s annual Christmas tree lighting ceremony:

When an Oregon college student, Mohamed Osman Mohamud, thought of using a car bomb to attack a festive Christmas-tree lighting ceremony in Portland, the F.B.I. provided a van loaded with six 55-gallon drums of “inert material,” harmless blasting caps, a detonator cord and a gallon of diesel fuel to make the van smell flammable. An undercover F.B.I. agent even did the driving, with Mr. Mohamud in the passenger seat. To trigger the bomb the student punched a number into a cellphone and got no boom, only a bust.

Indeed, the only missing ingredient separating Portland from Boston, was the FBI’s decision of what to fill the 55-gallon drums with. (For more details on other FBI cases, see: FBI’s History of Handing “Terror Suspects” Live Explosives)

The NYT piece continues, describing how the FBI picks its targets:

Typically, the stings initially target suspects for pure speech — comments to an informer outside a mosque, angry postings on Web sites, e-mails with radicals overseas — then woo them into relationships with informers, who are often convicted felons working in exchange for leniency, or with F.B.I. agents posing as members of Al Qaeda or other groups.

The article also explains how some targets “seem ambivalent, incompetent and adrift, like hapless wannabes looking for a cause that the informer or undercover agent skillfully helps them find.” Disturbingly, the NYT reports what appears to be the coaxing of one target toward violence they would otherwise never have considered:

“He was searching for answers within his Islamic faith,” said his lawyer, Clinton W. Calhoun III, who has appealed his conviction. “And this informant, I think, twisted that search in a really pretty awful way, sort of misdirected Cromitie in his search and turned him towards violence.”

A year after the NYT article was written, the Boston Marathon would be attacked by two explosive devices, killing three and injuring many more. The suspects, Tamerlan Tsarnaev and brother Dzhokar Tsarnaev, would be announced by the FBI a day after a bizarre press conference cancellation and a security scare at the federal courthouse where a suspect was allegedly being brought.

An explanation for the FBI’s bizarre behavior may be owed to the fact that it now turns out that at least one of the suspects in the Boston bombing had caught the attention of Russian investigators in 2011 who then contacted the FBI to investigate the matter. The FBI would indeed interview Tamerlan Tsarnaev, several family members, and conduct investigations into Tsarnaev’s background, phone conversations, and Internet activity. This was all finally disclosed on April 19, 2013 in an official statement that can be found on FBI.gov:

Once the FBI learned the identities of the two brothers today, the FBI reviewed its records and determined that in early 2011, a foreign government asked the FBI for information about Tamerlan Tsarnaev. The request stated that it was based on information that he was a follower of radical Islam and a strong believer, and that he had changed drastically since 2010 as he prepared to leave the United States for travel to the country’s region to join unspecified underground groups.

In response to this 2011 request, the FBI checked U.S. government databases and other information to look for such things as derogatory telephone communications, possible use of online sites associated with the promotion of radical activity, associations with other persons of interest, travel history and plans, and education history. The FBI also interviewed Tamerlan Tsarnaev and family members. The FBI did not find any terrorism activity, domestic or foreign, and those results were provided to the foreign government in the summer of 2011. The FBI requested but did not receive more specific or additional information from the foreign government.

The FBI’s bizarre behavior grew more suspicious when CBS reported that initially the FBI denied it had any prior contact with the Tsarnaev’s. In their report, “CBS News: FBI Interviewed Tamerlan Tsarnaev 2 Years Ago,” CBS claimed:

CBS News reports although the FBI initially denied contacting Tsarnaev, the brothers’ mother said they had in an interview with Russia Today.

That interview with Russia Today, in an article titled, “‘They were set up, FBI followed them for years’- Tsarnaevs’ mother to RT,” stated of the suspects’ mother:

But her biggest suspicion surrounding the case was the constant FBI surveillance she said her family was subjected to over the years. She is surprised that having been so stringent with the entire family, the FBI had no idea the sons were supposedly planning a terrorist act.

She would say of the FBI to Russia Today:

“They used to come [to our] home, they used to talk to me…they were telling me that he [the older, 26-y/o Tamerlan] was really an extremist leader and that they were afraid of him. They told me whatever information he is getting, he gets from these extremist sites… they were controlling him, they were controlling his every step…and now they say that this is a terrorist act! Never ever is this true, my sons are innocent!”

“I strongly believe they were just puppets and executors of something of bigger scale.”

“There certainly were mentors. I was shocked when I heard his words, his phrases, when every other word he starts sticking in words of God. I question what he’s doing for work, (and) he claimed he would just put everything in the will of God. It was a big concern to me. He called me ‘confused’ when I started explaining to him, make yourself useful to yourself and to your family and maybe you’ll have extra to share with everybody else.

“It wasn’t devotion, it was something, as it’s called, being radicalized. Not understanding what he is talking (about). He is just using words for the sake of the words and not understanding the meaning of it.’’

Perhaps, these two young suspects were “looking for a cause,” that an “informer or undercover agent skillfully helped them find.”

Clearly now, it is confirmed by the FBI itself, in an official statement found on their website, that they did indeed contacted the suspect and his family. The FBI also claims it, “did not find any terrorism activity, domestic or foreign,”  but clearly there must have been some evidence of at least some “pure speech — comments to an informer outside a mosque, angry postings on Web sites, e-mails with radicals overseas.”

The FBI refuses to elaborate on the case, prompting even journalists across the mainstream media to ask important questions. Business Insider’s article, “The FBI Needs To Explain Why It Failed To Monitor Boston Bombing Suspect Despite A Clear Warning,” asks the following questions:

Given the explicit warning, why didn’t the FBI continue to monitor Tsarnaev?

• Why didn’t the FBI follow up with the foreign government when it didn’t get the additional information it requested?

• How common is a warning from a foreign government about a specific person like this? Does the FBI get thousands of them?

• What made the FBI effectively clear Tsarnaev — and what might the FBI change  to avoid making this mistake again?

• Will the FBI conduct a full investigation into what happened?

The answer to these questions may help answer what transpired between 2011 when the FBI allegedly closed the case, and the 2013 bombings – including answering whether or not the Tsarnaev brothers were part of yet another FBI entrapment. Perhaps such suspicion may seem unwarranted, after all, despite the FBI fabricating terror attacks, they averted them before being carried out…

But at least one undercover operation, in 1993, was carried out to deadly effect. FBI agents, according to the New York Times, were indeed overseeing the bombers that detonated a device killing six and wounding many more at the World Trade Center. In their article, “Tapes Depict Proposal to Thwart Bomb Used in Trade Center Blast,” NYT reported:

Law-enforcement officials were told that terrorists were building a bomb that was eventually used to blow up the World Trade Center, and they planned to thwart the plotters by secretly substituting harmless powder for the explosives, an informer said after the blast.

The informer was to have helped the plotters build the bomb and supply the fake powder, but the plan was called off by an F.B.I. supervisor who had other ideas about how the informer, Emad A. Salem, should be used, the informer said.

The account, which is given in the transcript of hundreds of hours of tape recordings Mr. Salem secretly made of his talks with law-enforcement agents, portrays the authorities as in a far better position than previously known to foil the Feb. 26 bombing of New York City’s tallest towers. The explosion left six people dead, more than 1,000 injured and damages in excess of half a billion dollars.

Can the FBI then, be ruled out as a prime suspect or accomplice in the Boston blasts? And isn’t it monumental folly to allow the FBI to investigate a crime they may have played a central role in? Raising suspicions further was the decision made not to read the lone surviving suspect his Miranda rights. While US President Barack Obama, the Justice Department and Republican Senators John McCain and Lindsey Graham claim such a disgraceful violation of American law is required for “security,” it seems more likely that it is instead needed to enhance a desperate coverup.

And if 10 years of war, torture, indefinite detention without trial, and the creation and expansion of the Department of Homeland Security, the FBI’s Joint Terror Task Force, the TSA, and other federal agencies couldn’t prevent the Boston bombings, why does the President, DOJ, and two Republican Senators believe suspending the rights of a suspect will in any way make America safer? A better question is, why do we the people continue to let them make these decisions?

Watch Alex’s analysis on the FBI involvement in the Boston Marathon bombing, and the FBI’s history of entrapping unwitting patsies.

Watch Infowars’ prescient break down and chillingly convincing evidence of a false flag attack from early on in the investigation.

"Unfortunately, no one can be told what the Matrix is. You have to see it for yourself. This is your last chance. After this, there is no going back. You take the blue pill, the story ends; you wake up in your bed and believe... whatever you want to believe. You take the red pill, you stay in Wonderland; and I show you how deep the rabbit hole goes."