CNN and Newsweek recently launched dubious tirades against what they called “conspiracy theories.”

Meanwhile, the Wall Street Journal published U.N. Considers Reopening Probe into 1961 Crash that Killed Dag Hammarskjöld, a report that broached the possibility that the United States may have been involved in the death of the secretary-general, who is shown in a file photo.

As a way to understand such varied messages, I urge readers to evaluate evidence with an open mind — and regard with special suspicion those commentators who slant their coverage with the loaded smear words “conspiracy theory” without citing specific evidence.

No one has time to investigate everything without preconceptions. For efficiency, we rely in part on slanted commentary by our favorite sources. But if the stakes are high and we want to be honest we should admit (at least to ourselves) that our preliminary conclusions should be subject to change based on new data.

My suggestions follow the spirit of the Justice Integrity Project’s JFK Assassination “Readers Guide” last fall. That 11-part series began with a catalog of books, archives, reports and videos.Then it proceeded to assess various theories of President Kennedy’s 1963 murder.

By now, we know from declassified documents that the CIA undertook a massive secret campaign to smear critics of the Warren Commission with the label “conspiracy theorist.”

The campaign used members of mainstream media friendly to the CIA, for example, to discredit New Orleans District Attorney Jim Garrison, shown below. Garrison was prosecuting New Orleans businessman Clay Shaw in what Garrison alleged was a conspiracy to murder Kennedy. Shaw, an OSS liaison to high-ranking British officials during World War II, founded a major regional trade mart in New Orleans shortly after the war. Garrison alleged that Shaw met with rightist opponents of JFK to plan the death.

A 50-page CIA memo, known as “CIA Dispatch 1035-960,” instructed agents to contact their media contacts and disparage those, like Garrison, criticizing the Warren Commission findings that Lee Harvey Oswald killed JFK and acted alone. The 1967 document is here in the original, and herein reformatted text of its summary.

Minutes of CIA meeting that same year indicated fear that Garrison would win a conviction.

But a jury promptly acquitted Shaw following more than a dozen deaths (including suicide) of potential witnesses and an intense smear campaign against Garrison by the national media. NBC News hired former high-ranking Justice Department official Walter Sheridan, who had been an early recruit to the super-secret NSA in the 1950s. Publicly an investigative reporter, Sheridan was involved also in operational efforts to undermine Garrison.

More generally, Operation Mockingbird was the CIA’s secret program to plant stories in the nation’s most prestigious news outlets.

“With this [CIA] memo and the CIA’s influence in the media,” author Peter Janney wrote in a guest column on our site last fall, “the concept of ‘conspiracy theorist’ was engendered and infused into our political lexicon and became what it is today: a term to smear, denounce, ridicule, and defame anyone who dares to speak about any crime committed by the state, military or intelligence services.”

Janney, whose late father Wistar Janney had been a high-ranking CIA executive, continued: “People who want to pretend that conspiracies don’t exist — when in fact they are among the most common modus operandi of significant historical change throughout the world and in our country — become furious when their naive illusion is challenged.”

After that background, let’s look at more recent uses of the term by the mainstream media to discredit those who suggest government complicity in notorious events.

Last week, CNN’s Jake Tapper engaged in little more than name-calling in his segment ‘Truthers’ to protest 9/11 Museum. Tapper brought in a like-minded guest, Salon columnist Emily Bazelon, who relied on the same kind of seat-of-the-pants speculation to denounce protesters.

Another example of selective analysis was a Newsweek cover story May 15, The Plots to Destroy America, written by Kurt Eichenwald. Oddly, Newsweek’s sensationalistic title itself implied a conspiracy — that the diverse government critics on the right and left whom the magazine attacked intended to “destroy” the nation with their “plots.”

I recognized the pattern. Three years ago, I hosted author Jonathan Kay on my weekly public affair radio show, Washington Update. Kay, a Canadian newspaper editor and law school graduate, had authored Among the Truthers, a 340-page book. Upon reading it, however, I saw that it raised alarm and mocked critics of 9/11 official accounts but did not analyze their arguments. 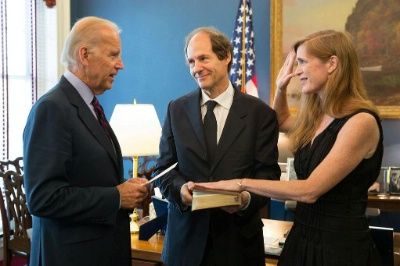 Similarly, Eichenwald cited as authority a handful of establishment “experts” who mocked those who criticize government or other establishment institutions.

Among the experts the Newsweek author repeatedly quoted was Cass Sunstein, a Harvard Law professor, author of the recent bookConspiracy Theories, and a former high-ranking Obama administration official. During the Obama first term, Sunstein in effect oversaw all federal regulation at the White House’s Office of Management and Budget.

A White House photo shows Sunstein with his wife, U.S. Ambassador to the United Nations Samantha Power, when Vice President Joe Biden swore her into office last summer. Her appointment followed her high-level work in national security at the White House and State Department during Obama’s first term. As noted in my book, Presidential Puppetry, she is a leading proponent for regime change and military intervention globally on the grounds of humanitarian principles.

Also last summer, Obama appointed Sunstein along with four others to the president’s review commission for a response to NSA whistleblower Edward Snowden’s revelations of massive illegal spying on the American public.

Eichenwald glosses over this heavy national security background and the rhetoric needed to foster public support for global interventions.

Even more relevant is that Eichenwald failed to note that Sunstein co-authored in 2008 what has become a notorious paper advocating propaganda techniques.

In the paper “Conspiracy Theories,” Sunstein advocated that the government secretly hire academics and journalists to thwart the dissemination of what federal authorities might regard as dangerous beliefs held by millions of voters, such as suggestion that officials were complicit in 9/11 or a cover-up.

Sunstein’s own proposal sounds, in other words, like the kind of plot government critics most fear as a violation of constitutional rights by an Orwellian, Big Brother state.

Yet Eichenwald argued that “not a scintilla of evidence” exists for the theories he disparaged. He called them “unsubstantiated nonsense.” But he failed, like most with his mind-set, to refute the best arguments of his targets.

Instead, he repeatedly cited well-credential experts, who applauded government officials for the most part and trivialized the concerns of complainers.

Such elitist, slanted reporting by Newsweek and CNN suggests why their audiences are plunging and the outlets find themselves focused on half-truths important to someone, but not audiences. The Internet provides alternative news sources.

In 2010, the Washington Post sold Newsweek for just $1 and assumption of debts. The Post announced that it wanted to place the publication into the hands of a like-minded publisher. This was Sidney Harman, the husband of Congresswoman Jane Harman (D-CA), a Harvard Law grad and prominent advocate of the intelligence-military complex. Newsweek, much like CNN, retains only a shell of its former clout and has twice been sold since Sidney Harman died.

That said, most of us still rely heavily on the mainstream media to complement our information from other sources.

Lauria (shown in a file photo) drew on his years on the beat to report for the Journal that the United Nations may reactivate on the basis of new evidence its dormant inquiry on whether its late leader, Hammarskjöld, was intentionally killed during his 1961 peace-keeping mission.

As a former stringer for the Journal for two years earlier in my career, I can imagine how much research the reporter must have produced before such a story would make it into print. His achievement is especially striking at a Murdoch-owned paper, whose owner is better known for benefiting from high-level intrigues than exposing them.

And what if the United Nations proceeds — and finds that the secretary-general died from foul play?

For one thing, that would not be good news for those who deny conspiracies. But they would surely find a way to avoid in-depth reporting.

"We View modern life with an uneasy amalgam of scorn and acquiescence, embracing the convieniences of technology, yet mourning the loss of values, meaning, and connection with the Earth & other people... We need to be using technology proporly... Intelligently."