“Purposeful domestic resistance” would require military to “rapidly determine the parameters defining the legitimate use of military force inside the United States.” 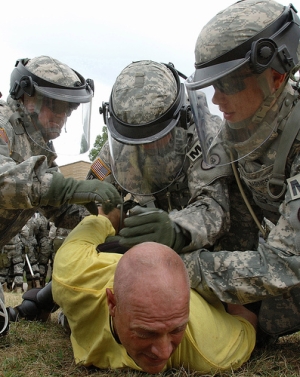 A recent report produced by the U.S. Army War College’s Strategic Institute warns that the United States may experience massive civil unrest in the wake of a series of crises which it has termed “strategic shock.”

The report, titled Known Unknowns: Unconventional Strategic Shocks in Defense Strategy Development, also suggests that the military may have to be used to quell domestic disorder.

“Already predisposed to defer to the primacy of civilian authorities in instances of domestic security and divest all but the most extreme demands in areas like civil support and consequence management, DoD might be forced by circumstances to put its broad resources at the disposal of civil authorities to contain and reverse violent threats to domestic tranquility. Under the most extreme circumstances, this might include use of military force against hostile groups inside the United States.” Lt. Col. Freir concludes.

Freir is a Senior Fellow in the International Security Program at the Center for Strategic and International Studies (CSIS). He joined the think tank in April 2008 after retiring from the U.S. Army after 20 years as a lieutenant colonel. In his role at CSIS he rubs shoulders with a whole host of globalist luminaries including Zbigniew Brzezinski, Henry Kissinger, Brent Scowcroft and Richard Armitage.

Echoing recent comments made by Pentagon advisors, along with other notable figures such as Colin Powell and Joe Biden, Freir also warns that the incoming Obama administration should prepare for a “first term crisis” that could act as a catalyst for such unrest.

“The current administration confronted a game-changing ’strategic shock’ inside its first eight months in office,” the report reads. “The next administration would be well-advised to expect the same during the course of its first term. Indeed, the odds are very high against any of the challenges routinely at the top of the traditional defense agenda triggering the next watershed inside DoD [Department of Defense].”

We have recently highlighted plans to station thousands more U.S. troops inside America for purposes of “domestic security” from September 2011, an expansion of Northcom’s militarization of the country in preparation for potential civil unrest following a total economic collapse or a mass terror attack.

“The U.S. military expects to have 20,000 uniformed troops inside the United States by 2011 trained to help state and local officials respond to a nuclear terrorist attack or other domestic catastrophe, according to Pentagon officials,” reported the Washington Post last month.

In a September 8 Army Times article, Northcom announced that the first wave of the troop deployment, which was put in place on October 1st at Fort Stewart and at Peterson Air Force Base in Colorado Springs, would be aimed at tackling “civil unrest and crowd control”.

After a controversy arose surrounding the admissions made in the Army Times article, Northcom retracted the claim but conceded that both lethal and non-lethal weaponry traditionally used in crowd control and riot situations would still be used in the field.

The increasing militarization of America is part of a long term agenda to abolish Constitutional rule and establish a “military form of government,” following a large scale terror attack or similar disaster, as Tommy Franks, the former commander of the military’s Central Command, alluded to in a November 2003 Cigar Aficionado piece.

Franks outlined the scenario by which martial law would be put in place, saying, “It means the potential of a weapon of mass destruction and a terrorist, massive, casualty-producing event somewhere in the Western world – it may be in the United States of America – that causes our population to question our own Constitution and to begin to militarize our country in order to avoid a repeat of another mass, casualty-producing event. Which in fact, then begins to unravel the fabric of our Constitution. Two steps, very, very important.”

In the short term, the domestic deployment of troops is likely aimed at combating likely civil unrest that will ensue after a complete economic collapse followed by a devastating period of hyperinflation.

This warning was again echoed a few days ago in a leaked internal memo from Citibank.

“The world is not going back to normal after the magnitude of what they have done. When the dust settles this will either work, and the money they have pushed into the system will feed through into an inflation shock,” wrote Tom Fitzpatrick, Citibank’s chief technical strategist.

The memo predicts “depression, civil disorder and possibly wars” as a fallout from an economic collapse that many say is on the horizon. 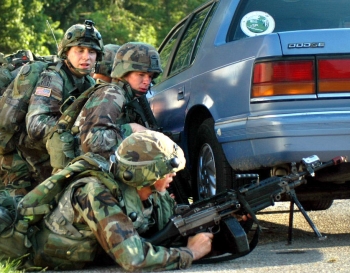 Naturally, the claim that such troop deployments are merely to aid in disaster relief efforts is a thin veil aimed at distracting from the real goal. Should a real tragedy occur, volunteers and already existing civil aid organizations are fully capable of dealing with such events, as we witnessed on 9/11.

The military are primarily trained to kill people and break things, and their role during the Hurricane Katrina relief efforts was mainly focused on detaining people in sports stadiums, shooting alleged looters and seizing guns from wealthy home owners in the high and dry areas, while real recovery measures were left to volunteers and local state authorities.

The open admission that U.S. troops will be involved in law enforcement operations as well as potentially using non-lethal weapons against American citizens is a complete violation of the Posse Comitatus Act and the Insurrection Act, which substantially limit the powers of the federal government to use the military for law enforcement unless under precise and extreme circumstances.

Section 1385 of the Posse Comitatus Act states, “Whoever, except in cases and under circumstances expressly authorized by the Constitution or Act of Congress, willfully uses any part of the Army or the Air Force as a posse comitatus or otherwise to execute the laws shall be fined under this title or imprisoned not more than two years, or both.”

Under the John Warner Defense Authorization Act, signed by President Bush on October 17, 2006, the law was changed to state, “The President may employ the armed forces to restore public order in any State of the United States the President determines hinders the execution of laws or deprives people of a right, privilege, immunity, or protection named in the Constitution and secured by law or opposes or obstructs the execution of the laws of the United States or impedes the course of justice under those laws.”

However, these changes were repealed in their entirety by HR 4986: National Defense Authorization Act for Fiscal Year 2008, reverting back to the original state of the Insurrection Act of 1807. Despite this repeal, President Bush attached a signing statement saying that he did not feel bound by the repeal. It remains to be seen whether President elect Obama will reverse Bush’s signing statement.

The original text of the Insurrection Act severely limits the power of the President to deploy troops within the United States.

For troops to be deployed, a condition has to exist that, “(1) So hinders the execution of the laws of that State, and of the United States within the State, that any part or class of its people is deprived of a right, privilege, immunity, or protection named in the Constitution and secured by law, and the constituted authorities of that State are unable, fail, or refuse to protect that right, privilege, or immunity, or to give that protection; or (2) opposes or obstructs the execution of the laws of the United States or impedes the course of justice under those laws. In any situation covered by clause (1), the State shall be considered to have denied the equal protection of the laws secured by the Constitution.”

Is the incoming Obama administration and Northcom waiting for such a scenario to unfold, an event that completely overwhelms state authorities, before unleashing the might of the U.S. Army against the American people?

“A whole host of long-standing defense conventions would be severely tested. Under these conditions and at their most violent extreme, civilian authorities, on advice of the defense establishment, would need to rapidly determine the parameters defining the legitimate use of military force inside the United States. Further still, the whole concept of conflict termination and/or transition to the primacy of civilian security institutions would be uncharted ground. DoD is already challenged by stabilization abroad. Imagine the challenges associated with doing so on a massive scale at home.”

The deployment of National Guard troops to aid law enforcement or for disaster relief purposes is legal under the authority of the governor of a state, but using active duty U.S. Army in law enforcement operations inside America absent the conditions described in the Insurrection Act is completely illegal.

The political left and right need to join forces and denounce this plan for what it is - another unconstitutional step towards the incremental implementation of martial law and the militarization of America.

"Where'd all the good people go?"