“Fake News” on Aleppo Liberation, Western Media Lies and Fabrications. The Words “Terrorists” or “Al Qaeda” are Not Mentioned 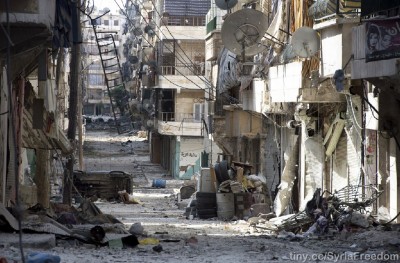 For the first time since mid-2012, nearly all eastern Aleppo residents are free from captivity – held against their will as human shields by US-supported terrorists.

Ain’t the way Western media see it, blasting out fake news headlines and reports – supporting Obama’s genocidal war, mocking the suffering of Syrians and all people devastated by US barbarism.

Below is a sampling of the latest contemptible headlines on Aleppo, fake news, the real kind:

A Complete Meltdown of Humanity: Civilians Die in Fight for Eastern Aleppo”

The Times blamed Syrian and allied forces along with Russia for executions carried out by US-supported terrorists, with Washington’s backing and encouragement.

A same day article said holiday season arrived early in Aleppo, joyous celebrations erupting because tens of thousands of residents are now free, thankful to Syrian forces for delivering them from hellish captivity.

The UN was caught lying numerous times on conditions in Aleppo and throughout Syria, supporting US imperialism instead of forthrightly denouncing it.

The Los Angeles Times had nothing in its Tuesday online edition about Aleppo.

CNN: “Aleppo: Reports of executions as Syrian army closes in”

CBS News: “Syrian regime close to retaking Aleppo; but loses Palmyra in the process” – one of two reasonably accurate headlines I spotted, other than this one calling Syria’s legitimate government a regime, a term applicable to America, Israel and other rogue states.

Most city residents are now free. Unknown smaller numbers remain hostages in one area still controlled by US-supported terrorists. They may be freed today. See below.

Once their withdrawal is completed, remaining eastern Aleppo residents are safe to stay in their homes. The entire city will be free at last from the scourge of US-backed terrorists – at least for now.

Stephen Lendman lives in Chicago. He can be reached at This email address is being protected from spambots. You need JavaScript enabled to view it..

His new book as editor and contributor is titled “Flashpoint in Ukraine: How the US Drive for Hegemony Risks WW III.”

Visit his blog site at sjlendman.blogspot.com.