The scale of energy rationing that may be required at home, in the NHS, schools, care homes, shops, pubs and on the streets of Britain because of surging energy prices and the threat of blackouts is laid bare today.

Experts have told MailOnline there is 'no escape' for the 66million people in the UK who will be encouraged to cut their use of gas and electricity this winter and even turn off the lights when the wind drops.

Kathryn Porter, from consultancy Watt-Logic, fears that the crisis will cost lives in the coming months and told MailOnline: 'We should keep our fingers crossed for a warm and windy winter'. Ms Porter has said that it's 'very possible' the UK will see plans for energy rationing, despite Liz Truss, the likely next prime minister, absolutely ruling it out, but the energy expert added: 'It would be voluntary, asking people to make a small sacrifice to avoid blackouts'.

Today it emerged that Britons could be asked to limit energy use this winter to head off blackouts by avoiding using gas and electricity at peak times in a move that will hit every part of life.

At home people may be encouraged not to use washing machines, dishwashers and ovens between 2pm and 8pm while charging cars before 9pm is also not advised when similar measures were imposed in the US this year. Abandoning the family weekday dinner at 6pm or the Sunday roast at 5pm may be required and moved to after 8pm or swapped for a cold dinner or leftovers.

The NHS Confederation has predicted that the solution for the health service will 'have to be made up by fewer staff being employed, longer waiting times for care, or other areas of patient care being cut back'. NHS England guidance says staff must turning off equipment and lights and better control temperatures in hospitals and surgeries.

Schools have even discussed three-day weeks and classes could be combined to reduce the number of rooms that require heating each day.

While care homes are being forced to take drastic action to absorb soaring living costs such as reducing menu options, using washing machines less and cutting down on entertainment and outdoor trips for elderly and vulnerable residents.

Pubs are already turning out the lights as soaring energy bills hit the ailing hospitality sector - with last orders at 8.30pm and closing by 9pm, food service being stopped and skeleton teams running venues to avoid financial ruin. Beer gardens are even being shut at night to save costs.

And councils may choose to copy Germany where street lights are being dimmed, traffic lights at quieter junctions are turned off, hot water and central heating is off in public buildings and monuments will no longer be lit overnight. UK municipal swimming pools could be made colder to reduce heating bills.

The Government denies there are any concerns about energy security in the UK.

A BEIS spokesperson said: 'The UK's secure and diverse energy supplies will ensure households, businesses and industry can be confident they can get the electricity and gas they need.

'Britain is at a strategic advantage compared to other European countries through access to our own North Sea gas reserves, steady imports from reliable partners like Norway, the second largest LNG port infrastructure in Europe, and a gas supply underpinned by robust legal contracts.

'Thanks to a massive £90 billion investment in clean energy in the last decade, we have one of the most reliable and diverse energy systems in the world, and unlike Europe, we are not dependent on Russian energy imports.'

These are the areas of British life that may be hit by rationing and the fight to save costs: 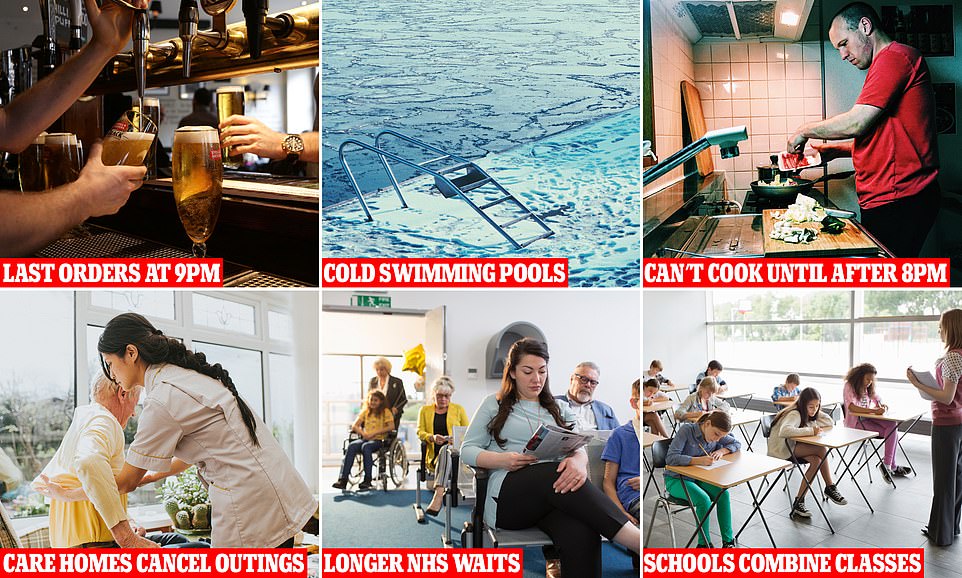 In the home: Cold dinners, washing in the mornings and lights off when the wind is not blowing

Millions could be forced to make sacrifices at home to avoid blackouts - but it could hit family life including delaying when they eat their dinner and swapping a hot meal for cold leftovers or a salad.

Kathryn Porter, from consultancy Watt-Logic, expects that authorities could ask consumers to reduce their use of electricity during peak hours, such as 2pm or 4pm to 8pm.

Parents and their children would be encouraged to eat later, or eat something that does not require cooking.

In Texas and California, tens of millions of people have been asked not to use washing machines, dishwashers and ovens between 2pm and 8pm because of the global energy crisis and reduce strain on power stations. Charging cars before 9pm is also not advised. 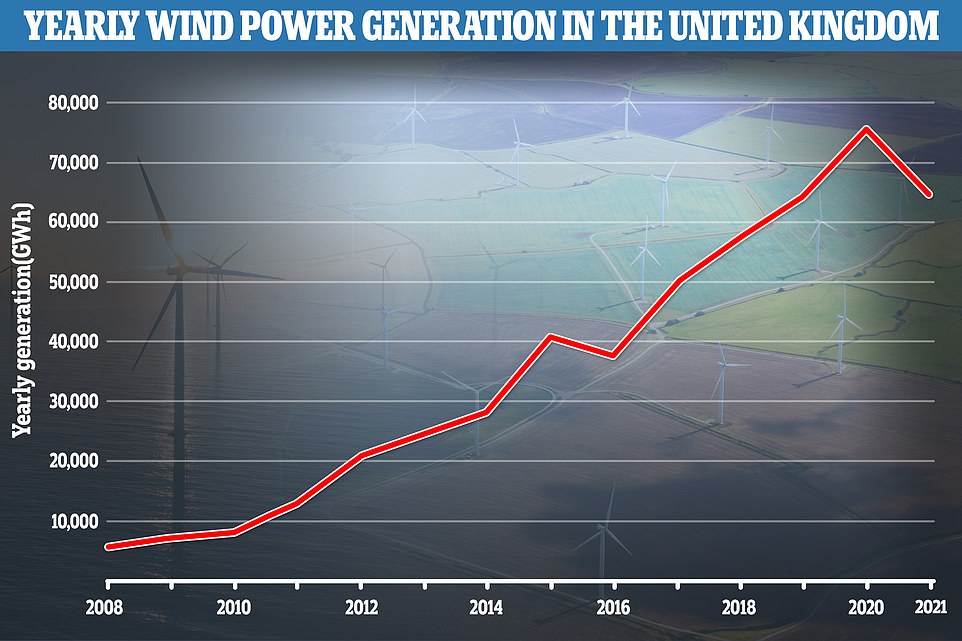 As statistics show wind power generation of electricity is dropping after years of growth, Britons could be asked to turn off the lights if the wind doesn't blow 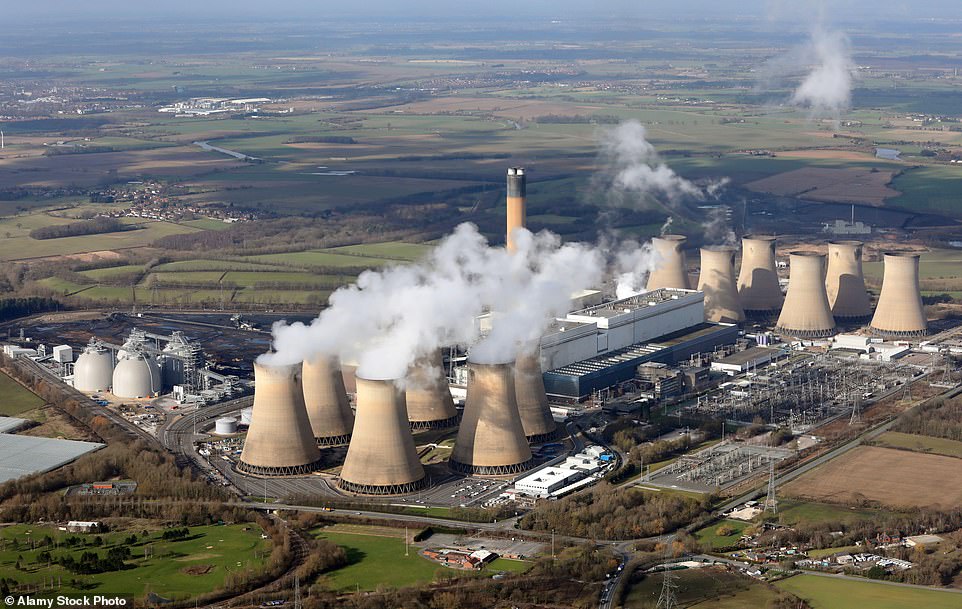 Families may be asked to cut their energy usage this winter to avoid blackouts if the weather 'doesn't go in our favour', an energy expert has warned

Ms Porter said: 'People could do their laundry, cook hot meals before or after the time period', but added that Britons must not 'avoid cooking a hot meal if you have young children or vulnerable people in your home'.

'It is possible we will see something similar here this winter,' she said, adding: 'I think it would be more an appeal or request for people to have their dinner earlier or later, or avoid using large appliances like washing machines during peak hours. I think it would be voluntary rather than compulsory'.

A lack of wind could also come into play.

She said: 'We have had quite low wind output in July and August...Demand is a lot higher in the winter, so if we have those weather conditions in the winter, our system is going to get very tight and that raises a risk of blackouts'.

Heavy industry users are also being braced to suspend or scale back production to protect supplies to homes.

Separately, contingency plans exist to dim the lights across parts of the country by turning down the voltage in the national cable grid in what are known as 'brown outs'.

The NHS: How energy bill crisis could make dire situation in hospitals even worse and care could have to be 'cut back' this winter

NHS treatment may have to be rationed this winter because of ever-increasing energy bills, health bosses fear in the face of a mammoth backlog and crises in the A&E and ambulance sectors.

Startling projections reveal some trusts face spending twice, or even three times as much as they did last year on electricity and gas.

Trusts aren't covered by Ofgem's 80 per cent price cap on electricity and gas, and so are even more vulnerable to surging prices in the coming months. As a result, health chiefs have had to ring-fence £1.5billion to fund the soaring bills.

Rory Deighton, of the NHS Confederation — which represents the healthcare system across England, Wales and Northern Ireland — said: 'This isn't an abstract problem.'

He said the solution 'will either have to be made up by fewer staff being employed, longer waiting times for care, or other areas of patient care being cut back'.

Read the rest of this utter fucking garbage if you want: https://www.dailymail.co.uk/news/article-11173211/Life-Blackout-Britain-Experts-warn-energy-rationing-winter.html

"When governments fear people, there is liberty. When the people fear the government, there is tyranny. "