DHS “See Something, Say Something” Campaign Headed For A Mall Near You

Residents of Indiana and Virginia could very soon start seeing signs and pamphlets in malls encouraging “If you see something, say something.”

According to a blog post URL found on the Department of Homeland Security website and information gathered from Government Security News article, the DHS has partnered with American real estate company Simon Property group, the owner of 393 properties worldwide, on September 6 to “keep shoppers safe.”

Mark Rockwell at Government Security News writes, “Under a new agreement with the Department of Homeland Security, 20 malls in Indiana and Virginia will participate in DHS’ “If you see something, say something” campaign, with possible expansion to other facilities nationwide.”

The blog post in question, however, cannot be found on the DHS homepage. See for yourself:

Interestingly, a quick search on the DHS site (query: Simon) yields results apparently related to the partnership, but when the appropriate search result is selected, no information regarding the partnership appears on the landing page.

The screenshot below illustrates the posting URL originally belonging to the Simon partnership post, however, for some reason or other, the content on the page has nothing to do with the partnership. 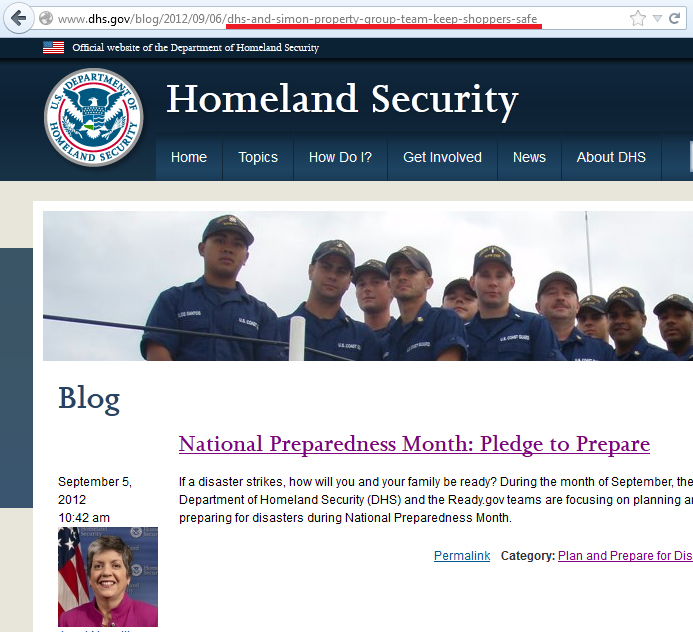 Why would the DHS want to keep mum about their partnership with the mall owner? Could there be a false-flag terror attack planned in our near future? Or are they just laying the groundwork for an introduction of more extreme security measures to be implemented, such as body-scanners and/or TSA grope downs?

Recently, the DHS brought attention to their snitch campaign when they began asking fans at sporting events to “help keep the country safe by reporting anything suspicious they see,” but the program has been “keeping us safe” long before that.

In December 2010, DHS expanded their “See something, say something” campaign to the Mall of America, who is not owned by Simon. The campaign involved “both print and video advertisements throughout the mall’s shopping and amusement park areas to help the thousands of daily tourists and shoppers to identify potential threats and suspicious situations.”

Also in 2010, we reported an announcement Napolitano made basically stating that behavior scanners would be making their way into sports events, rock concerts and shopping malls. The Hill article has since been modified after their controversial headline sparked outrage. (Again, by looking at the URL we can see the original title of this article was “Next Step For Body Scanners Could be Trains, Boats and the Metro”

As we’ve reported, the behemoth governmental entity, created on the pretext of external terror threats, has gradually (and arguably effectively) managed to realign its cross-hairs to target domestic threats, specifically Americans who are “suspicious of centralized federal authority,” “reverent of individual liberty,” and people that “believe in conspiracy theories that involve grave threat to national sovereignty and/or personal liberty.”

Trumpeted as necessary for the safety and security of the public, the DHS’ snitch campaign, since its official implementation on January 1, 2011, has been incrementally conditioning unsuspecting Americans into welcoming a police state takeover wherein the TSA or DHS would be present at every public venue, be it federal building, sports stadium, high school prom, or even right in your community.

Instead of bringing about a safer society, programs like these actually breed suspicion, distrust, fear and contempt among the general population, essentially making participants lapdogs for the feds aiding in the search of a citizen domestic terrorist that does not exist.

"An error does not become truth by reason of multiplied propagation, nor does truth become error because nobody will see it."