Obey enviro-tyranny or be banished to the ghetto, threatens new government-funded propaganda piece 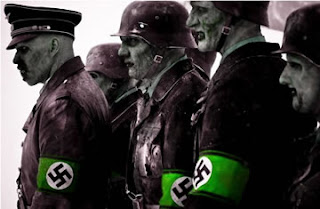 People who resist the state controlling every aspect of their existence will be forced to live in squalid ghettos while the rest of the population will be tightly controlled in high-tech prison cities – that’s the future envisaged by eco-fascists who are exploiting the contrived global warming fraud to openly flaunt their plan for the total enslavement of mankind.

The threat posed by the kind of scenario being promoted by Forum for the Future, the group responsible for the chilling video below, cannot be emphasized enough. The dictatorial hellhole of 2040, where cars will be banned, meat rationed, farming completely abolished and overtaken by the state, behavior catalogued on “calorie cards,” and careers ordained by the government, is the ultimate goal of the control freaks who have seized the reigns of the environmental movement.

Nearly every aspect of the policies undertaken by the global dictatorship that runs the “planned-opolis” depicted in the video are lifted wholesale from historical tyrannies.

- The state completely taking over the means of food production and farming. This is a throwback to the Soviet system of collectivized farming, where Stalin organized land and labor into large-scale collective farms. Farmers who resisted the state taking over their farms were arrested and sent to Siberian gulags. As a result of the mass seizure of property and the disruption that collective farming brought to food production, upwards of 3 million people died from starvation from 1932-33 alone. A similar system imposed in Maoist China under the “Great Leap Forward” led to the Great Chinese Famine and the starvation of at least 36 million people.

- The incarceration of resistors to green fascism inside squalid ghettos and their subsequent separation from family members is a frightening throwback to the Nazi-run Warsaw Ghetto and other concentration camps and prisons within cities that housed Jews and political dissidents during World War Two.

- The restriction or even outlawing of meat, something already being vehemently pushed by eco-fascists, to the point where a hamburger becomes a rare delicacy to be enjoyed on special occasions – and only then if you can afford it. As my wife who is Chinese will attest, up until the late 80′s before China started to lift itself out of poverty, meat was a rare treat that was sparsely available and highly restricted. Again, the “planned-opolis” is nothing less than a fusion of Communist and fascist control measures inflicted upon the population to keep them poor, starving and weak.

The people who produced this video, funded by monolithic elitist banks and corporations like Royal Dutch Shell and Bank of America as well as the British government, know very well that every aspect of their “planned-opolis” is lifted directly from the most abhorrent and brutal dictatorships in history. They are openly flaunting the neo-fascist ideology behind the green movement.

Of course, as is made clear in the video, none of these regulations or controls will apply to any of the elitists imposing them on the rest of us. Think Al Gore and his multiple oceanside mansions with heated swimming pools. They will still be able to roll around in SUV’s and fly private jets while quaffing the finest fillet steak and belching tons of CO2 as they lecture the rest of humanity about their carbon footprint. Think Prince Charles and his insistence that the proles not be allowed to take baths as he lounges in the luxuriant splendor of royal palaces.

They are also engaged in a ploy to shift the parameters of the Overton Window - which is defined as “A range of policies considered to be politically acceptable in the current climate of public opinion.” By constantly bombarding us with extreme and repugnant proposals, they gradually wear down the human psyche until people begin to accept draconian controls over their personal life as normal, necessary and reasonable.

This is a psychological attack and a realization of the stepping stone method to tyranny. Whereas we might not accept cars being banned and meat being rationed now, we will accept incandescent light bulbs being outlawed and paying carbon taxes on fuel. As each hurdle is cleared, the globalists propose something more extreme so that we will always come to a compromise and accept a slighter lesser tyranny, but in the long term, the elitists achieve all of their goals with aplomb.

And to top it all off, the debate between the “liberals” over at the Guardian website in response to this story did not revolve around a castigation of this authoritarian future hell, but a question of whether old people should merely be advised by government workers how to kill themselves when they reach 65, or whether the state should just kill them directly.

This kind of despotic destiny is not only being pushed by the elite, it has an army of greenwashed zombies behind it who have been recruited to make the democide of the elderly (the useless eaters) an intellectually acceptable and reasonable idea. Presumably, the disabled and the mentally ill will also be exterminated in the pursuit of a highly efficient “planned-opolis,” another idea of which Hitler would have vehemently approved.

Once government is given the power to kill anyone they deem to be unproductive in this collectivist Orwellian nightmare, the gates of hell are thrown wide open. In comparison, meat rationing, carbon taxes, eco-surveillance, calorie credits and transport restriction will seem like a walk in the park.

Alex Jones’ seminal film Endgame, released in 2007, warned precisely of the kind of hi-tech slave grids being implemented that are now routinely proposed by top eco-fascist organizations. We urge you to warn everyone you know about this agenda and to stand up in unison to resist the first great assault on human liberty of the 21st century, which is now certain to be inflicted on us under the guise of saving mother earth. We either stop this now, or we end up in the eco-ghettos that our masters have readied for us in their “planned-opolis” of 2040.